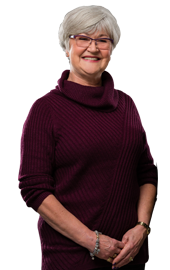 With personalized service, our famous D.O.Gs, and extraordinary staff committed to making your banking experience as easy and stress-free as possible, being a member is pretty great. To get started, visit a branch near you (bring two pieces of ID!) or apply online from the comfort of your home.

To open an account with our online application, you’ll need to meet the following criteria.

What to expect when you open an account online

Opening an account online makes becoming a member at Sunova easy. Here’s what you can expect during the account opening process:

What our members have to say

Wondering what our members have to say about Sunova? Click any of the member’s photos below to read their Sunova ‘stories’.

Sunova and its staff make you feel like a person and not a number. All the staff know me and my husband by name, and when I don’t remember my account they usually know it. My relationship with Sunova is based on trust.

Years ago, when my husband needed a mortgage for the home he was building, all the banks wanted him to be in the five-year Home Warranty program… he told them that he was the builder and why would he spend $800.00 extra when, and if, a problem occurred he would be the one that would take care of it. It was only Sunova that understood that if he did not take care of his home he would lose his equity… the mortgage was for $38,000 and the equity in the home was already $80,000. Sunova’s directors were able to look at this and make a decision based on the facts in front of them, not because that is what is done for everyone else.

For me, Debbie always keeps me apprised of what is happening in my account. When I needed to look after things for my brother, who has a disability, she was on top of things. My mother was in assisted living, my father had passed and Debbie was there for me. I could count on her to let me know what was happening and make decisions from there. The TRUST I have in her and the staff at Sunova far surpasses anything I would have at any other banking institution. We have a relationship based on integrity and trust.

I chose Sunova because I knew someone who was working at the Oakbank branch and she helped me get a better deal on my mortgage than my other bank. I then chose to change all of my banking over because the rates were good, it was close to my business, Rejuvenating Massage, as well as home, and the staff is always really welcoming.

I love that Sunova is very involved in the community and gives their full support for each event held. I enjoy going to my local branch during the different holidays (especially Halloween) to see all the nice decorations put up. I don’t know any other banks that will allow their employees to put that much time into things like that, which I believe makes the community feel very welcomed during events and holidays.

Every time I go into the Oakbank branch I am always greeted with a welcoming smile and never feel that I am being rushed out of there. I am a big animal lover and so it is nice to be able to bring my dog in and take care of any business or personal banking matters and not feel out of place.

Exactly 15 years ago, I moved to Selkirk with NOTHING but my children, my clothes, a box full of Pampered Chef and my leased car. I had no furniture, no money, no credit, nothing but my Pampered Chef kitchen tools and a desire to succeed.

In 2003, I meet with a lady named Shirley from Sunova. She believed in me and told me what to do to get my credit on track and what type of job to get so I could qualify for a mortgage. I listened to her and spent four years following that advice.

I lived in Manitoba Housing for four years and worked no less than five jobs at any given time. I had a dream of owning my own home. I had written out goals of what it would look like. Everything I did was to move forward. I watched the other mothers sit on the street smoking on their front steps in their pyjamas. I put on my fake fur coat and went to work every day. Nothing was going to stop me from owning a home, nothing.

In 2008, I met with Dan Yungwirth. He also believed in me and the business opportunity I had at the time. He set me up with a $5000 business line of credit that changed my life. I started working closely with Heather around 2011. Once again someone believed in me. I have to thank Cyndi as well, for believing in me and helping put together the new mortgage on Gowryluk Road.

So to be where I am now, in this position, brings tears of gratefulness to my eyes. The service that I have received from Sunova throughout the years has been nothing but outstanding. I have Sunova to thank for always believing in me.

I started coming to Sunova in 2013 when I got my first paycheque. I came here because my parents were using Sunova as their bank and I thought I would do the same as they always had great experiences. There was no reason for me not to give Sunova a shot.

For me, Sunova is different from the rest because I didn’t have the greatest credit score built up and when I wanted to get my first vehicle, nobody would look at me. I decided to go straight through the bank and fortunately I got approved. Shortly after that I was holding the keys to my New Chevrolet Avalanche.

From there on, the staff at Sunova gave me a good plan to budget and I started to notice I was getting a nice savings account. Not once did I feel judged for being a teenager. I was not in the best financial situation but they gave me a chance and it changed a lot of things.

Today when I walk into the credit union, I am greeted by the ladies and gent at the front desk and it is a very welcoming atmosphere, which is huge for me. I think the staff is great and I recommend a lot of people to Sunova.

I opened up a business account with Sunova in 2013 when I bought the Garson Grocery and Tempo Gas Bar in Garson, Mb.

Sunova has branches in every community around Garson including Selkirk, Beausejour, and Oakbank to name a few, which makes it very convenient to do all my banking with them. Their hours of operation are the best in the whole industry.

Although the hours are a perk, most importantly it is the personal level of service with a smile that I receive that keeps me coming back. Since I live in East St. Paul now, I usually go to the Riverbend branch. I visit two to three times a week. The staff there is just awesome, such as Lisa, Jared, Yuliya, Derek, Natalia to name a few.

I was so impressed with Sunova, and so fed up with other financial institutions, that over the years I have switched all my personal and commercial banking accounts, mortgages, line of credits, loans, credit cards and safety deposit boxes to Sunova. Michael Bjarnson from Commercial Banking has helped me save an enormous amount of money in interest costs alone over the years.

I have no hesitation in recommending Sunova to anyone, anytime, and I must say that ever since I started my relationship with Sunova, my confidence and trust has started coming back into the financial system, which I had totally lost while dealing with other companies. I used to be so frustrated as the other guys always put their own interests at the forefront rather than the customer. Sunova is different. They put our relationship first.

I look for this simply exceptional relationship to continue for the rest of my life.

Sunova is different because when I walk in the door, they know who I am. I’m not just a number or just another member to the staff there. I feel like I am dealing with people I know because the staff have taken the time to get to know me. They are always there to help too.

The staff at Sunova do whatever they can do help, from getting you a loan or a mortgage to helping with your goals. They aren’t giving one solution for every member either. They work hard to make solutions that work for you.

Help HQ staff are available during the following hours:

At Sunova Credit Union, we use cookies and other technologies to optimize our website and our online services. To learn more about how Sunova is committed to protecting our members’ privacy please check out our privacy statement. By continuing to use our website, you agree to the use of these cookies. You can opt-out of this by changing your online preferences.